According to TechCrunch it’s the top secret GMail companion calendar app, and he’s posted the screenshots to prove it. 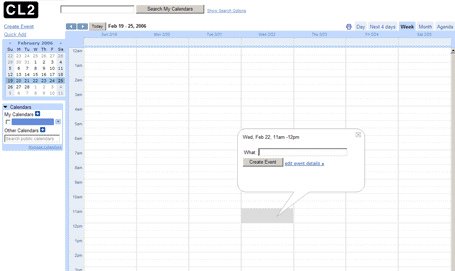 Supposedly the beta is still limited to about 200 Googlers, and although “a long way from release” they can only begin to expand the beta from here on out.

If I was Google, I wouldn’t “officially” launch GMail without it.

Google out bids rivals Yahoo and MSN and steps up its search technology with Orion, a patented algorithm for displaying search results directly in the search window rather than requiring the user to “click through” to the actual page.

And as a bonus, the software’s creator, 26-year-old PhD student, Ori Allon, has put down stakes at the Googleplex to optimize his code for the big time.

This is a huge loss for Bill Gates who, after personally praising the software and it’s creator on multiple occasions, now ends up losing the bid.